A draft economic analysis is currently available for the proposed US 50/South Shore Revitalization Project being proposed in the Stateline area of Lake Tahoe. While this project is not entirely similar to the proposed downtown Carson City plan, the economic analysis includes case studies showing the economic impacts of similar lane reduction and pedestrian improvement projects in other communities. Click on the link below and refer to pages 31-39 case studies and general economic impacts for similar projects.
Draft Economic Analysis of the US 50/South Shore Community Revitalization Project

Additional case studies can be found at the Project for Public Spaces website (link here). The main case study page on "Rightsizing Streets" can also be downloaded as a PDF from the links below, as well as case studies for Poughkeepsie, New York, and Orlando, Florida. The Orlando example is of a street reduced from four lanes to three lanes (two lanes plus a turn lane) with average daily traffic volumes similar to Carson Street.
Rightsizing Streets
Edgewater Drive case study, Orlando, FL
Raymond Ave. case study, Poukeepsie, NY

Downtown business representatives have approached the City and requested consideration of a plan to stripe Carson Street through the downtown area to allow on-street parking. The purpose of the plan is to create a pedestrian-friendly environment to help make the downtown a destination for residents and visitors. When the Nevada Department of Transportation owned Carson Street before the freeway was constructed, their mission was to move cars and trucks through the downtown as quickly as possible. The goal of the conceptual plan is to support the downtown businesses by making it easier for potential customers to get out of their cars and shop in the downtown area, maintaining and enhancing its commercial viability as the freeway bypasses the downtown. The conceptual plan could help transition this portion of Carson Street back from a highway to a multi-functional street serving the downtown needs.

The conceptual plan would require no construction other than striping the pavement and removing the existing fence at some locations along the sidewalk. All existing landscaping would remain in place. Generally, parallel parking would be striped along the sidewalks and a single travel lane would remain in each direction, and turn lanes would remain. Click on the Conceptual Downtown Parking Graphic link to view the plan, which runs from 5th Street to William Street. Zoom in on the PDF plan to view detailed block sections.

On January 3, 2013, the Board of Supervisors directed City Public Works staff to proceed with developing an implementation plan for the project including detailed cost estimates. City staff will also research and provide additional information on vehicular traffic patterns, trends, and projected impacts of the proposed project. The plan will be reviewed by the Board of Supervisors on April 18, at 6:30 PM in the Community Center, Sierra Room. 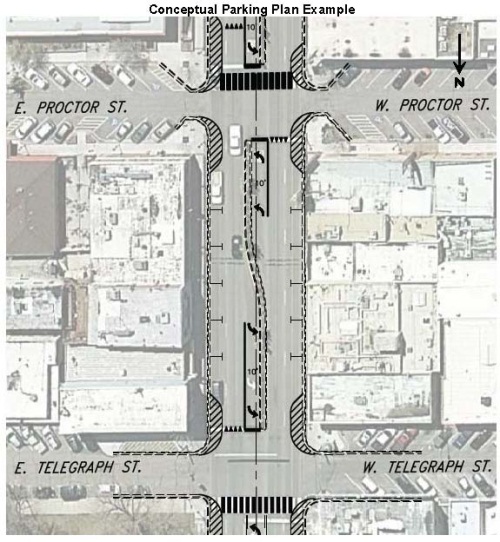 Potential benefits of the plan to stripe additional parking:

In November 2012 the Planning Division sent out notices to downtown businesses and property owners to solicit feedback on the conceptual plan. The businesses and properties to which notices were sent are generally located between 5th Street and William Street, with addresses on Curry Street, Carson Street, or Plaza Street, and including all side streets within that area. Notices went out to a total of 247 property owners (81) and businesses (166).