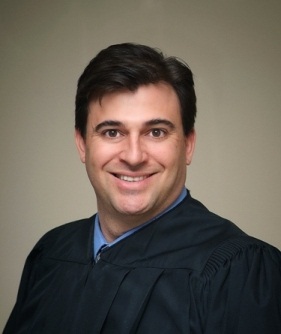 In April, 2011 Judge Armstrong was appointed by the Carson City Board of Supervisors to replace longtime Justice of the Peace Robey Willis in Department 1 of the Carson City Justice/Municipal Court.  He assumed his duties on the bench on May 2, 2011.

Prior to Judge Armstrong’s appointment, he served as Justice Pro Tem for Carson City in 2009.  In this role he handled both criminal and civil calendars, including preliminary hearings, temporary restraining orders, small claims, traffic and general criminal matters.

Concurrent to serving as Justice Pro Tem, he also practiced law as a sole practitioner in Carson City at the Law Office of Thomas R. Armstrong, Ltd., from June of 2009 to May of 2011.  His legal practice focused on the areas of criminal defense and general civil litigation, primarily practicing law in Carson City but handling cases throughout northern Nevada.

Prior to his solo practice, he was an associate in the Litigation Department of Kummer, Kaempfer, Bonner, Renshaw & Ferrario from 2007 to 2009, where his primary practice areas were civil litigation and criminal defense.

From 2001 to 2007 Judge Armstrong served as Senior Deputy District Attorney in the Carson City District Attorney’s Office.  During his tenure there he successfully represented the State of Nevada in numerous bench and jury trials.

Judge Armstrong is deeply committed to this community and heavily invested in its future.  His wife is a native of Carson City.  They have two preschool age children that they are raising in this community.  As much as possible, he enjoys the wonderful outdoor activities our community offers, and playing basketball with his over-30 Carson City city-league team.

Judge Armstrong serves on the Board of Directors of the Carson City Circles Initiative, as well as the Steering Committee for Partnership Carson City.  He is a long-time Nevadan of 38 years, raised in Carlin.  Judge Armstrong graduated with distinction from the University of Nevada, Reno with a Bachelor of Arts in Criminal Justice, and received his law degree from the University of Utah College of Law, where he was named a William H. Leary Scholar.