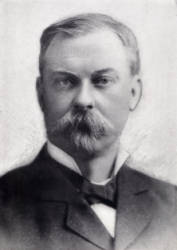 In 1871, Trenmor Coffin came from Indiana to Nevada to teach. He was elected district attorney for Ormsby County in 1876. After losing District Attorney re-election in 1878, he went on to the Nevada State Legislature and served as  state assemblyman in 1880 and Speaker of the Assembly in 1889. He also served two terms as Ormsby County Treasurer, a stint as Nevada Attorney General and was the U.S. District Attorney for Nevada for four years.