A year older than the State of Nevada, Warren Engine Company No. 1 was formed on June 17, 1863, with twenty members comprising the original group. Humor and pathos, seriousness and horseplay, all are blended in the century plus history of one of the nation’s foremost volunteer fire-fighting units.

The Curry Engine Company No. 2 was organized May 24, 1864. It was named after Abraham Curry, one of the earliest settlers of this section, who laid out the city and planned that the plaza so often mentioned in the pages that are to follow, would some day become known as capitol square. He built the fire house and was known as the "Fire Boy's Friend." The Curry’s motto was: "Our aim---the public good."

In 1873 the S.T. Swift Company No. 3 was formed, taking its name from S.T. Swift, another Carson pioneer and sheriff of Ormsby County for a number of years. It caused much trouble for the other companies and its existence was short.

The original members of Warren Engine Co., eager in their desire to give Carson a real department, met enthusiastic support from their fellow townsmen and $2,000 was collected the day following the meeting.

The Warren Engine Company No. 4 of Marysville, California (both departments adopted their name from the Revolutionary War hero, General Warren, who fell at the Battle of Bunker Hill) agreed to sell its apparatus to the new Carson Company and a deal was completed whereby the local firemen were to pay one thousand dollars in thirty days. James D. Winters, P. Hopkins, and D.J. Gasherie agreed to act as bondsmen, but it was not necessary as A. Lewis and M. Mendelson solicited more than the required amount with apparent ease. As soon as the money was collected, telegrams were sent to Marysville for the engine and to San Francisco for three hundred feet of hose "both to be here before July Fourth."

When the Warren Engine Company was organized it had the usual officers, although the man now termed "Chief" was known for many years as the foreman.  First officers of the department were: D.J. Gasherie, foreman (Chief); A. Lewis, First Assistant; C.B. Slicer, 2nd Assistant; R. Logan, Secretary; P. Hopkins, Treasurer; J.D. Winters, E. Smith, and Mr. Kelly, trustees.

Enthusiastic then as now, the Warrens held their first ball on July 3, 1863, less than three weeks after organizing.

The men were ordered to appear in full uniform which included bright red shirts. Tickets were six dollars and supper was furnished by the ladies. A banner, which hangs in the museum, was presented at the ball by a group of young ladies. 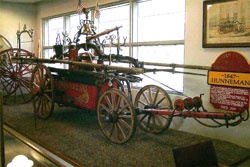 lines.  The eagerly-awaited engine from Marysville, arrived on schedule and was the object of considerable attention both on its arrival and during its entire existence. The little engine, first fire-fighting equipment in the state of Nevada, had 2½ inch hose lines and one two-wheeled hose cart, with a capacity of five hundred feet. The "tub" as it was familiarly called, was manufactured in Boston and came around the Horn to California.