On the tool box of this tub was a large brass No. 4. The Warrens cut off a portion of the triangle in the figure 4 and left the figure 1.  The old tub was shipped from the manufacturing company in Boston, Massachusetts by boat and came around the Horn.

The first equipment of the Curry’s was purchased from the City of San Francisco, and comprised on hand engine known as Knickerbocker No. 5 in 1864, also one two wheeled hose cart with a capacity of 800 feet of 2½ inch hose and later or probably about 1884, a two wheeled hose cart was built by W.D. Torreyson of Carson for the Curry’s. It was a magnificent piece of work, not especially beautiful, but built for strength and sturdiness. It is the property of Carson City, and is stored in the fire house museum. 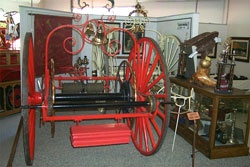 ,500. Her one thousand feet of 2½ inch hose cost $750, and the freight $642. Most of the money was raised by public subscription. On the arrival of "The Little Giant" in September, 1873, a controversy arose over the management of the new engine, in which the Appeal took a prominent part, advocating a city engineer to manage the fire department.

The result was the formation of a third company, namely the S.T. Swift Company No. 3, mentioned before. Until this company was formed, "The Little Giant" or Silsby Steam fire engine was housed in a shed west of the Ormsby House.

On the formation of the new company, the Curry Engine House was divided into two parts, separated by a walled partition, and the rear portion of the house, housed the S.T. Swift Company, and the new engine. John Mack had charge of the steamer on its arrival. When later it was under the care of the S.T. Swift Company No. 3, the engine was in charge of Frank Hall, Jonathen Saffel, William Cowan and John Mack.

As long as the Swift Company existed, there was friction between them and the Curry’s on account of the division of the building, and the entrance and exit for the new company on the west side, near the rear of the building. When the Warren’s took the building over, the steamer was there and was later sold to Ab Ambrose.

When the Curry’s had full control of the building it was partitioned off into several sleeping rooms beside the main hall. In 1875 the house was under the charge of Jonathen Saffel and dwelling within its walls were several questionable characters. There had been a number of suspicious fires. The townspeople were highly incensed at the many outrages, and suspicion finally centered on the aforesaid questionable residents of the fire house. They were warned to leave town. Six of them heeded the warning, but the seventh, Tom Burt, remained and one morning in December, 1875, he was found hanging over the cemetery gate with a "601" sign on his silent bosom. People who were here at the time have said they had doubts of his guilt, however the fire bug was inactive after this display of revenge.

The first engine house was located just east of the Chronicle office on the site of the residence of Mr. and Mrs. Wm. Brady. A bell and tower already stood in the yard and the shed in the rear was remodeled to house the new piece of equipment.