During the next few years there was the usual run of small fires, although two of major consequence were reported. It is interesting to note that virtually all of the old records end with the terse notation "Incendiarism." The suspected arson and the lack of water were the two greatest obstacles in the early fire-fighting days. On August 18, 1865, fire destroyed a whole block between Carson and Fall streets, and Fourth and Fifth streets with a loss estimated at $25,000.

On May 1, 1867, a fire alarm came from the State Prison at 9 p.m. The flames had made such progress that it was impossible to save the building, all but the walls being consumed. The Warrens however, managed to save the new addition to the prison, as well as the adjoining Warms Springs Hotel. A fire at the pavilion on June 29, 1867 was promptly extinguished, with a loss of only $300. The pavilion was owned by Peter Cavanaugh.

This history would be incomplete with some notice being given to the water company. Thompson and West state that on February 29, 1860, the water company was organized with Wellington Stuart as president. In 1859, the forest extended down through a portion of the Harry Anderson ranch, and small trees and little rivulets of water ran through the little settlement. One or two wells had been dug at that time and more followed as the population increased.

The second water company was owned by Ed Sweeney. The reservoir of this system was situated about one half mile north of the old Heidenreich ranch on the Kings Canyon road. It was conveyed to the town through wooden pipes and stored in wooden cisterns for fire purposes. The water system in the early days consisted of ten cisterns and 15 plugs. Plugs were known by the names of the individuals who lived nearby. These cisterns were about 14 x 16 feet with a depth of four or five feet. When pumping water from them, the steamer and hose would fill with mud. A cistern would be emptied with twenty minutes if full, which they seldom were. Later, Helm and Rice installed an improved water system. As it is now, it was necessary to conserve the water. So many people would let the water run at night, and the watchman was ordered to turn it on when the fire alarm sounded. One night neither Mr. Helm nor the watchman heard the alarm. The result was a destructive fire. After this experience the water was kept turned on at all times.

On June 17, 1913, the 50th Anniversary of the department was celebrated in grand style. F 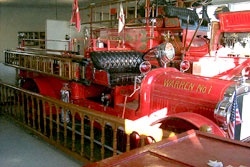 ive months later on November 13, the city trustees purchased a fire engine for the department which was the first motorized equipment in the state. The engine, a Seagrave, is still in perfect running order despite its quarter century of service. Since 1913, more equipment was added, including a new engine and an engine purchased from the Reno Fire Department.

Also included in the department equipment was an up-to-date first aid ambulance. The ambulance proved its worth in times of emergency.

Members of the department were selected in a unique manner. Firemen watched young men at fires and observed how they cooperated in combating a blaze and their general aptitude for the work. If a person was considered qualified, that person was recommended by the three top officers and a secret vote was taken and, if accepted, a letter was sent telling of the acceptance. After serving twenty years, a member could be placed on the exempt list if he so desired.