The history of the first Warren bell is unknown, but it was a Sheffield bell cast in England. It was cracked at the time of the fire in the Dr. Fox residence in 1890 when the thermometer registered 30 degrees below zero. The Curry bell was cracked at the same time. Efforts were made to repair the Warren bell but these proved of no avail. The city finally purchased a new Blymer bell for the Warrens and afterward removed the same to the Curry House. Then the Warrens bought a new bell through public donations.

The city bell is now in the Warren Engine Company museum, and the Warren bell was sold to the city of Elko after the Warrens moved.  When the Curry’s disbanded the first time on November 25, 1876, they gave their bell to the old Carson Public School. When the new schoolhouse was built it was placed in the belfry of that building. When that building was afire, the bell fell through the roof.

The serious demeanor that characterized their devotion to duty has been, and still is, the symbol of Warren Engine Company No. 1. The early motto of the company still holds good. It is: "Where Duty Calls, There You’ll Find Us."

In the 1930s and 1940s, members of the fire department were summoned to duty by a unique system of blasts on the fire horn mounted at the station in back of Meyers Hardware. Firemen went to the city locations determined by the number of blasts on the fire horn; men located near the downtown location of the station drove the apparatus to the scene and met a number of firemen at the scene, together with half of the townspeople.

This system worked well until the 1950s when radios were introduced. The location horn blasts were discontinued and firemen could be directed to the scene or to the firehouse as necessary or as directed by the "Order of the Day."  In 1954, the Warrens moved across the street to a new 3-bay, 2-story building, which was the headquarters station. 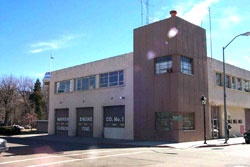 Carson City was growing.  In 1964, the Carson City Fire Department converted to a mix of volunteers and a staff of paid firefighters, including the city’s first paid Fire Chief, Les Groth, a member of Warren Engine Company No. 1. Prior to this conversion, only the three station men, Burd Lindsay, Louie Nelson, and Elsmore (A.B.) Riehl, were paid while Warren Engine Company No. 1 volunteers fought the fires.  Data in the table  below illustrates the operations of the fire department during the 1950s and 1960s.