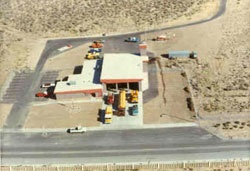 This enhanced geographical coverage throughout the city and aided in decreasing response time. Station 1, Warren Engine Company, continued to support the central city, as it had since 1952, from its location on the corner of Curry and Musser streets.

In 1994, Station 1 moved to its present facility at 777 South Stewart Street.

The present department is multi-faceted and always challenged to meet the needs of growth in the city and surrounding rural areas. With a paid force currently numbering 63 personnel (including support personnel) augmented by a 32-member volunteer force from Warren Engine Company No. 1, the Carson City Fire Department continues to provide premium emergency service in the protection of life and property of the citizens and visitors of Carson City, Nevada.

The members of Warren Engine Company No. 1 have been very diligent in the preservation of their heritage.   The Company maintains a beautiful fire museum containing apparatus, equipment, photographs, and other memorabilia that extends back to that first meeting in 1863, including all of the written record books.  The museum is located in the main fire station at 777 South Stewart Street, Carson City, Nevada.  Please come by and visit.  You are always welcome!

Click the Play button on the viewer below to tour the museum!