The Empire Cemetery is also located within the city limits. I

t has a historical marker locating the site, which is on a hill east of town. The site parallels Highway 50 East. Many founders of the community of Empire as well as Carson City are buried there. Most prominent of those buried there is the founder of Empire City himself, Nicholas Ambrose, born October 8, 1824, died May 22, 1880 (his marker is shown here). His wife, Rebecca, born 1834, died 1912, is also buried there. 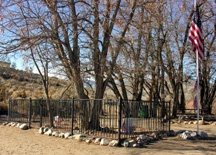 Two Civil War veterans, John Thoroughman and James Johnson, are buried in an isolated plot southeast of the Ormsby County Poor Farm, which was located on the site of present day Fuji Park (Highway 395 South). The graves are located on the south side of Clear Creek and were recently enclosed with a black iron fence to mark their site.

Burton Wungnema is buried here. Burton with help from his father, Earnest, built the Wungnema House (stone house) located in Mills Park. Burton's wife, Pearl, raised eight children in the home. Burton is from the water clan of the Hopi Nation. The front and reverse sides of Burton's marker are shown here. The reverse side shows an etching of the water clan symbol, this same symbol is displayed in stone on the fireplace in the living room of the Wungnema House.

The inscription on the monument to Dat so la lee (shown above) reads: "'Myriads of stars shine over the graves of our ancestors.' Dat so la lee had seen some 96 winters, mostly in Carson Valley, when death came in 1925. She was the last of those Washoe weavers whose ancient art had been practiced by countless generations. Gathering willow, fern, and birch with the aid of her husband, she wove into her masterpieces the legends of her people and their love of nature. Her baskets are unsurpassed for artistic conception and symbolic importance. She is buried in the adjoining cemetery, yet her memories and her visions are so woven into her baskets that she will live on to remind us of the history and unique tribal artistry of her people." Dat so la lee's grave site and marker are shown below. 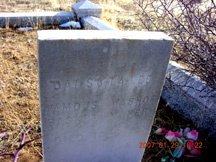 The first known cemetery in Carson City was originally called the Pioneer Cemetery. It is located at the west end of Fifth Street. It was here that Major William Ormsby and his scout, William S. Allen, were buried when killed at the Battle of Pyramid Lake on May 12, 1860. Allen's grave remains, but Major Ormsby's body was moved to the Wright Cemetery in 1865, and in 1880 he was exhumed and moved to Oakland by the family. Finally in 1907 his remains were cremated and taken to New York. The large granite cross dedicated to Ormsby and Allen, along with a handful of headstones, still remain on the small hillside cemetery.