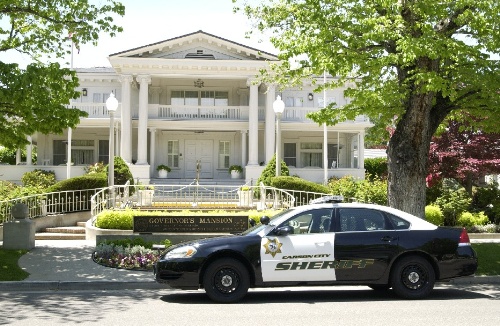 Our Patrol Division is the most visible and largest division of our agency. The Patrol Division consists of sworn deputies who are trained in every aspect of law enforcement to include emergency vehicle operation, use of firearms, defensive tactics, criminal law, arrest and patrol procedures, Crisis Intervention,  etc. Our Patrol Deputies respond to emergency and non-emergency calls for service, enforce traffic laws, investigate crimes and assist in crime prevention.

The division is responsible as first responders (POST Category I Deputies) for a geographic region of 153 square miles of county land, 268 miles of paved roadways, and a vast rural environment which includes portions of Lake Tahoe. Within the city proper of approximately 57,000 persons, the area is broken into five distinct areas known as “beats” with an officer assigned to each on a shift basis.

The Patrol Division supports the School Resource Officer program, which is a joint partnership funded by the Carson City Board of Supervisors and the Carson City School District Board of Trustee’s. The program is Supervised by a Divisional Sergeant, and provides for Deputy’s directly assigned to the High School and Middle Schools, as well as an education officer (DARE) assigned to the elementary schools.

Among the most popular programs in the Sheriff’s Office is the K-9 program. The Patrol Division staffs K-9 support for patrol enhancement (including Special Enforcement), search and recovery, and drug detection. K-9 handlers also routinely provide direct support to the School Resource Officers, community education briefings, and local business support. For K-9 selection, all of the dogs purchased are “pet friendly”, and used to enhance relationships in the community, especially targeting positive relationships with juveniles.

A traffic management division assignment is from the Patrol Division. Though not a currently funded division of the office, Deputies assigned provide a direct response to accident reduction initiatives and the prevention of loss of life due to traffic accidents.  Most commonly seen in town, Deputies assigned to this initiative ride specially equipped Harley Davidson motorcycles.

As the county is the state capitol and is a combined municipality (city/county), officers assigned are often tasked to work with other jurisdictions. Other city law enforcement entities include the courts Alternative Sentencing Division. State law enforcement agencies operating within the county include Capitol Police, Legislative Police, Attorney General, Parole & Probation, Nevada Highway Patrol, State Fire Marshall, and Nevada Department of Prisons (Northern Nevada Correctional Center, Nevada State Prison, and the Stewart Conversation Camp). Most federal agencies operating in the area have their resident offices located in Reno, just 30 minutes away.