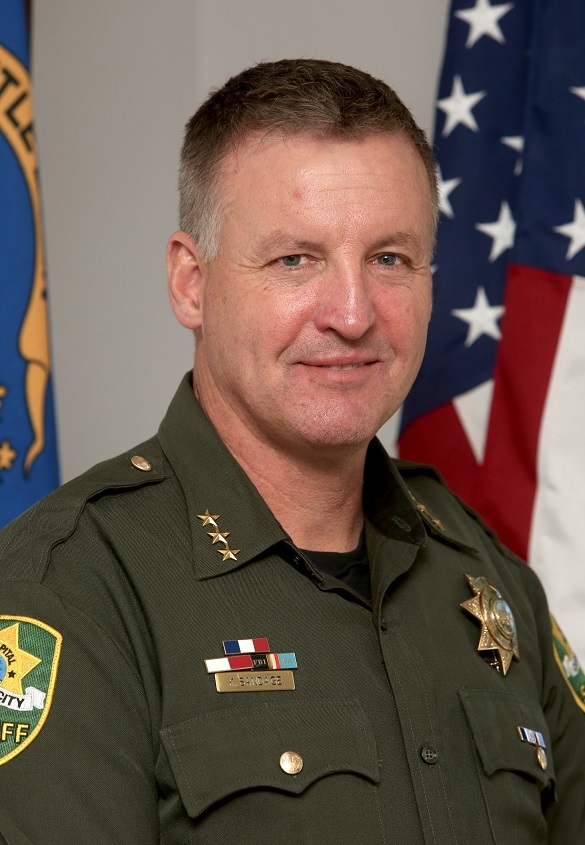 As the Undersheriff of the Carson City Sheriff’s Office, Ken Sandage is second in command, and assists the Sheriff in managing all of the law enforcement services and activities of the organization, as well as coordinating public safety opportunities with other local, state, and federal law enforcement entities in the area. Sheriff Ken Furlong promoted Ken Sandage to the position of Undersheriff in December 2017 following the retirement of Undersheriff Steve Albertsen. Undersheriff Sandage, is a decorated 26 year veteran with the Sheriff’s Office, and held the position of Assistant Sheriff of Operations for over three years prior to his promotion.

Undersheriff Sandage has vast experience that has provided the foundations for his leadership style. He is a Carson City resident and United States Air Force veteran. He was first hired on July 26th, 1991, taking a position in the Detention Division. After completing his initial training and law enforcement certifications, he was transferred to the Patrol Division. As a Patrol Deputy, he displayed strong leadership attributes and gained the experience necessary to earn a position in the Detectives Division. He was later promoted to the grade of Sergeant and reassigned back to the Patrol Division. Within months of Sheriff Furlong’s first term in office in 2003, Sandage was promoted by Furlong to the grade of Lieutenant, and after graduating from the FBI National Academy in September 2004, he secured the rank of Captain. Following impeccable assignments to the management of the Patrol Division, Detention Division, and ultimately Investigations Division, Kenny accepted a position on the Sheriff’s immediate Executive Staff as Assistant Sheriff.

Undersheriff Ken Sandage holds certifications with the Nevada Peace Officers Standards and Training (POST), including Basic, Intermediate, Advanced, Management, and Executive certifications, and a graduate of the 218th Session of the FBI National Academy.