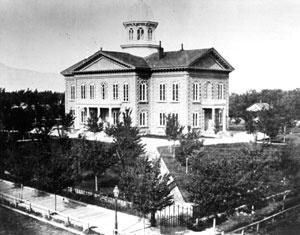 The most visible dome in Carson City marks the symbol of Nevada's Government since completion in 1871.

Construction began on the building on April 21, 1870.  It was completed on May 1, 1871. The Capitol Building was designed by Joseph Gosling of San Francisco. The Building was built by Peter Cavanaugh & Son of Carson City.  Cavanaugh's $84,000 bid was nearly half of the actual cost of the building. The building was constructed of locally-quarried sandstone.  The silver-colored cupola dome rose 120 feet above the ground.  Furnishings cost an additional $20,000.